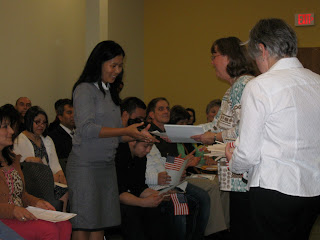 Meet Sonam, America's newest citizen! Sonam and Kunga came up to Portland yesterday, and today Sonam took her oath and it's all official - see her flag? She and 52 other new Americans from 23 other countries, swore to uphold all that is good and right in this country. It was really moving! 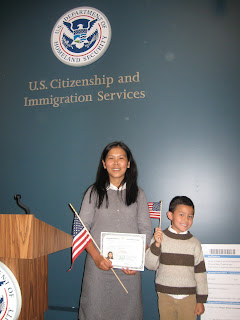 Could my nephew BE any cuter? He knows it, too. Now his new thing is saying, out of the blue, "God bless you, Carrie," with a huge grin on his face. 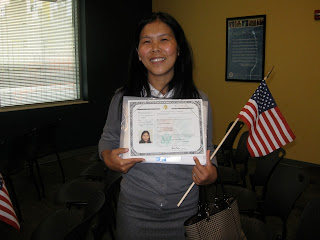 One of Sonam's biggest dreams is to travel to Tibet - her homeland, yet she's never been there. Now with her American passport and visa, she should be able to travel much more safely and not worry about detainment.

So, here's what you've missed since I've been absent from the blogosphere:

* Before the Baccalaureate Mass STM and I took Woohoo out to dinner. This is what she wanted in lieu of a big party - dinner with both, and only, her two parents. Feeling like *&^% that this is far too seldom the case, we of course obliged. We had a nice time, gave her our gift, and toasted to her overall awesomeness. At one point in the evening she said something about how nice it was without Rojo tapping, singing, thumping his leg, interrupting, etc. STM said, "Oh, Rojo, you'll never know what he's done to us!"

Woohoo didn't miss a beat and said, "I wouldn't say to you, as much as I'd say for you. You aren't the same people you'd have been without him."

* She's clearly wise beyond her years, and so ready to have a life that isn't about him. Speaking of which...

* At the Baccalaureate Mass one of the salutatorians mentioned Rojo by name, and said the moment he won the Timber tickets and the whole school gave him a standing ovation, was the proudest moment for the school in all her four years.

* At least three times at the graduation something was said in one of the speeches, or during one of the award presentations, about the impact of the program Rojo is in, on the rest of the school. One of the boys that went WAAAAAYYY above and beyond (missed his Senior Skip Day to stay and help Rojo), got a special award. We nearly clapped our hands off for him, and later got a picture of him, his parents, his award, and Rojo.

* After the graduation, graduate after graduate came looking for Rojo to get a picture, a hug, a hand shake, a goodbye.

* One graduate had leis flown in from Hawaii for everyone in her family. And Rojo.

* Woohoo came down with some flu bug right before the party, got picked up by STM at 5:00 AM on Sunday, and virtually slept for the next 48 hours.

* The next day was Father's Day and we had combined it with a graduation party for Woohoo. She missed the whole thing. Her "Congratulations, Woohoo" cake was delicious. We took a picture for her.

* Rojo will start his summer job of "working" at the same preschool he did last summer, on July 2nd. Until then, he is mine, mine, mine, and there is no end in sight of talking about the ice cream truck. Modern technology has only added to the frenzy. He now has friends positioned all over the neighborhood, poised and ready to respond the minute they hear the sounds. There is Face Time, texts, e-mails, phone calls, you-name-it, all in an effort to find the truck each and every day.

* He's now discovered Garage Band on his iPad and taps out songs to... say it with me... ice cream truck tunes!

* I had cataract surgery on Wednesday. The operation could NOT have taken more than 5-6 minutes. STM said he didn't spend 10 minutes total in the waiting room. Went great, and although there is some strobe-like thing going on now, I can already see better. I'm not even wearing my ill-fitting, very smudged, very cheap readers right now!

* Best thing about the surgery was the two days off I milked it for - the full day of, and the following day. Let's just say I am almost through Season 4 of "Private Practice," and leave it at that.

I am at Hopeful Parents today with an inspiring story of a friend's journey from tragedy to triumph!

Running errands around after I picked up Rojo from his last (1/2) day of school:

Me: Oh, darn, I forgot to get gas before I picked you up, now I'm low.

Him: Honey, you don't need gas, LOVE is all you need!

When Rojo and I met with his new developmental pediatrician (and she went through our story from the beginning), she asked a lot of questions about how things operate now for him, and for the family. I think she was trying to have the full picture in her head so she can advise us going forward, and I appreciate it. We aren't in crisis. I told her we weren't in crisis. I told her we used to be and now we're not, and really, we're just after staying the course we're on.

It's weird to watch someone reflect back to you your life as they see it, particularly an "expert." I would never have used the word "adapted" to describe what we've all done, but that's exactly what it is, we've adapted. Rojo has done his share of adapting, but by in large, STM, Woohoo, his family, friends and I, we've adapted. One might call it "giving up," but I am going to go big with adapted. Do the four of us ever go to a restaurant? No, we've "adapted." Do we ever go see a movie, or even sit around the flat screen together in our very own house? No, we've "adapted." There is very little about our lives that looks like everyone else we know, but we're so used to it now, it's our normal. Our at long last, adapted, accepted, at peace with, normal.

I have piles all over and around my desk. Each one is a stack of ick I care not to deal with, each one more depressing and off-putting than the next.

I straightened the piles. I got out my Post-its and made notes ON the piles. I put dates on my calendar of when things really needed to go down, in relation to the piles, but I didn't actually tackle the piles. It was more of a pre-tackle.

Then I asked myself, "Where is the trip to Tahiti pile?" There is no pile of fun going on.

Immediately sent an e-mail to my favorite person in the world, the massage therapist, Miho. Because there are no accidents, she e-mailed back within 5 minutes and could see me that very day for one hour of pure relaxation and self-care.

Woohoo's and Rojo's high school had their equivalent of Field Day on Friday - a day spent having fun. Yummy food, fun activities, a time to be with all your friends and just goof around together. Both kids were really looking forward to it - Woohoo, because it was her last, and Rojo, because it was his first.

The school has had year-long fund raising efforts to help support their sister school in Kenya. On Friday they were raffling off four donated tickets to the Portland Timbers, to raise money for their favorite cause. I'd given each kid a few bucks to spend on food. Rojo used some of his to buy a bag of popcorn, and spent three dollars buying three raffle tickets.

At the end of the day there was an assembly, where various things took place, not the least of which was the drawing for the raffle. You guessed it, Rojo won. Out of 600 kids in the school, he won. That was great, but not the greatest part. The greatest part was what happened next - his name was called and the WHOLE ENTIRE SCHOOL spontaneously stood up, clapped, cheered, and chanted his name. And there were tears. Lots of tears. Lots and lots of happy, touched, thrilled, tears.

I had people coming up to me in the parking lot after school, calling, texting, e-mailing, stopping me when they saw me in the neighborhood - everyone had heard or was there.

It was a Hollywood ending. Sometimes things really do happen like in the movies.
at June 05, 2012 7 comments:

What They Don't Know

After handing over two million pieces of paper to both the Department of Disabilities Services and the new developmental pediatrician, all of which painstakingly documents Rojo's weaknesses, I was once again struck by how little they actually know about my boy.

Do they know that he is funny?

Do they know that he is deeply spiritual?

Do they know that he can diffuse any stressful situation with just the right retort?

Do they know that he has endeared himself to hundreds of people?

Do they know that he knows everyone's name, how old they are, and what their interests are?

Do they know that if you tell him what's going on with you, he will follow up on that? "How was your surgery/trip/meeting/game?"

Do they know that if he is given a $20 gift card to the neighborhood market for his Confirmation, he will spend some of that money buying his mother a gift?

Rojo had been planning on what to spend his $20 on for weeks - over a month. Finally, on Saturday, he rode his bike up there, took a reusable bag in bright magenta, and executed his plan. He came home beaming from ear-to-ear. "Care, I spent $15.79. They crossed off $20.00 on the card and wrote, 'Balance: $4.21.' I bought a water bottle, licorice, Annie's fruit snacks, Goldfish, and something for YOU! Care, I bought you a present! Are you excited to see your present? Are you excited to see what I got you at the store?"

He reached in the magenta bag and pulled out a pint of half and half. "Care, this is for your coffee! I know you like to put cream in your coffee! I bought you a present! Do you love your present?"

STM walked in during all this, and seeing his excitement he asked, "Rojo, are you more excited about using your gift card to buy treats, or the present you bought Care with the gift card?"

We all know his answer.

On a Brighter Note

Got a good laugh yesterday when a friend of mine told me she'd taken her 8th grade daughter shopping for a graduation dress, and each dress the mother held up, the daughter said, "That's a Carrie Link dress."

Of course, she whole-heartedly rejected each "Carrie Link dress," but nonetheless, it's nice to know I have a look, and it is recognized, if not appreciated, by the 14-year-olds in my world.

I bring you an example of a "Carrie Link dress:" (And I do, in fact, own this very dress. Bought it to wear for Woohoo's graduation and a wedding I'm going to this summer. Just can't go wrong with a classic sheath!)