Well, Wil forgot entirely about "needing" ground cocoa, but did not forget about needing a lid for his certain re-usable cup he wanted to fill with water for camp. He did not forget to make it my #1 mission in life to track down said lid, before there could be any peace.

Off we went to 7-Eleven, in hopes one of their Big Gulp lids would fit. It did. The nice man behind the counter said we could have the $0.001 lid, but I felt obligated to buy something, so we looked around the store.

We were the only ones in the store, until a man wearing one of those fluorescent orange vests, walked in and headed to the coffee. We left the store with our purchase and our free lid, and got in my car. I started to drive out of the parking lot, and noticed the driveway was semi-blocked by a truck. Thinking that was weird, I stopped, watched for a second, and realized the truck was indeed in motion. Looking up at the cab of the truck, I saw that it held no driver. Putting two-and-two together, I realized the driver must be inside 7-Eleven, getting coffee (which he, obviously, had not had enough of).

I reversed, parked, ran in the store yelling, "YOUR TRUCK! IT'S MOVING! IT'S ROLLING DOWN THE STREET!" The man in the orange vest flew out of the store, hopped in his truck and drove it to safety, before hitting or injuring anyone or anything.

I don't know what I'm more in awe of, the fact that there are no accidents? If we hadn't needed that lid, we never would have been there. If we'd taken the lid and left, and not shopped for a minute, we would have been gone before the man arrived. Or, that with enough adrenaline, my brain can still kick into gear and process information?
at June 29, 2016 2 comments:

In the last 42 hours, I have helped my children find two sets of keys, a wallet, a jacket, a pair of prescription glasses, and a cell phone. These were not items misplaced at home, no, these were items that were left behind and had to be tracked down. In all cases, the items were found and held safe by  good-hearted strangers, until we could claim them.

It should be noted that I was not with either of my children, when they lost said items.

Had an impromptu, and lovely, visit with my neighbor and friend last night. She is busy with a demanding career and the responsibilities that come from taking care of aging parents. Although we live across the street from one another, we rarely see each other.

As we caught up, the conversation moved from subject-to-subject. I shared with her, that I'm very worried about my poor memory, the lapses between what I want to say, and what I am actually saying, the increased dependence on Post-It notes and phone reminders, to make sure things get done, and the train of life stays on the track. I shared that I made a grocery list last week, came home with everything crossed off, yet, when I went to look for the corn tortillas, they were nowhere to be found. I remember standing in the aisle looking for them. I remember not finding the ones I like best on one stand, and intending to walk across the aisle to the other stand. Somewhere between that intention and the execution, I became distracted. Could have been that I got a text from Wil with further orders for the day. Could have been that I saw something else in the store, that wasn't on the list, and when I veered for a second off my shopping rhythm, I lost the thread of what I was doing, entirely. Could have been that I thought of something else, grabbed my phone to make a note so I wouldn't forget, and then, forgot what it was I was doing while I was trying to remember what not to forget.

Could it be that I am bombarded from 5:30 AM to 8:00 PM, every day, with total and absolute minutiae that is made to be do-or-die? Last night, while trying to enjoy an outing with STM and two of our favorite people, I got an urgent text from Wil: "ONE THING WE NEED TO GET ALSO FOR OUR HOUSE IN PORTLAND IS GROUND COCOA."

Could it be that I'm 53 and just plain getting old?

Where was I going with this? I don't know. What I do know, is I have to wrap this up because we "need" to go get ground cocoa. Not sure what we'll do with it, but that's neither here nor there.
at June 28, 2016 4 comments:

To Die Before Dying

We know there are many kinds of deaths. We experience the death/loss of relationships, ideals, aspirations, images and identities we held for ourselves, hopes and dreams. Life is on a continual and multi-level cycle of death and rebirth. The old must "die" for new life to be born.

I sat this morning, prayerfully shuffling the Mother Mary Oracle cards. I drew Our Lady of Resurrection. She comes to us at a time of resurrection and release. A time of light at the end of a long, dark, circuitous tunnel.

The invitation comes to reflect on the wisdom and meaning of the nocturnal animal, the owl. What has this night-time of the soul brought forward? We think of owls as serene, wise, with an unusual way of looking at things. With the help of owl wisdom, we can find peace after a "death" of any type, we can find our serenity, our wisdom, and adjust our way of looking at things.

Today is the 20th anniversary of my father's death. June 7th, 1996. I was eight months pregnant. We had our house for sale by owner. I had a barely-two-year-old. My father had been living two hours away. I'd had insomnia for months. I was big, hot, tired, overwhelmed and pulled in every direction. It was  not a good chapter, and I don't often let my mind go there.

And yet, 20 years later, there's been enough time, healing, distance, perspective and dulling of memory, to make it all feel like a bad dream - one in which I've awaken from. Either that, or a story I heard about someone else. Someone, perhaps, I used to know but with whom I have lost touch. 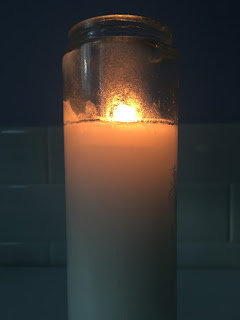 Had it all planned out. I had the laptop ready-to-go. I was going to spend at least a couple hours trying to write, elsewhere, since no real writing seems to get done at home, what with all the constant noise and demands, both real and imagined.

Just as I was grabbing my keys, putting on my shoes, and about to leave, my husband called. There was a family emergency, of sorts, and was I free?

While dealing with the sort-of-emergency, Wil called. He was at home with his support worker, and the WiFi wasn't working to his satisfaction. Why ask your support worker to help you, when you can just call Care?

"Go upstairs, look at the wall where the WiFi 'things' are plugged in, and unplug them," I coached.

"I can't see what you're looking at. Are you looking at the wall?"

We went several rounds of that, before I asked to speak to the support worker.

Hours later, when all the emergencies of the day had been dealt with as much as they could possibly be, I reflected on Wil's questions. "These? Right here?"

It is often hard to know what we're looking at. Despite guidance, direction, information and having it right in front of us, we cannot always see it. We don't know what to do with it. It's confusing. Sometimes, we need someone else to come along and unplug us - force us to step back, take a break, before starting up all over again.