Driving a car without brakes--stopping the card Fred Flintstone style, new year at college with new roommates, a house so filled-to-over-flowing, I will be required to share a bed with a stranger, these are but a sampling of my dreams of late.

Obviously, anxiety dreams, specifically about being asked to do too much, sometimes requiring super-human strength.

My husband often says that the hardest part about his job, is switching gears. If he can go into work and go from start to finish on whatever it is, it's easy. It's the constant interruptions, the putting out of fires, the pulls in opposite directions that require a hitting of the brakes, a shift of gears, and a revving up, over and over and over again, that is the most exhausting. Just like buying a used car--you want to find one that has mostly highway miles, and not a lot of town driving. All that town driving takes its toll.

Speaking of traffic, I recently heard Portland is the 10th worst city in the nation. Everyone I know is complaining about it. It's noticeably worse than it used to be, there are no more secret shortcuts, and it's become too difficult to avoid, it's bleeding into all day, every day.

The car without brakes.

I think what I am feeling and experiencing is far from unique, in fact, I may be tapping into the collective.

Becoming contemplative, staying present, breathing. These are the antidotes. Those to whom I most often turn are: Eckhart Tolle: A New Earth and Richard Rohr: Another Name for Everything. They center me, return me to more of a state of equilibrium, remind me that peace begins within.

Our sweet Flicka was put "up" a year ago. We continue to miss her. When we look through old pictures, she is in so many, always by someone's side, quietly holding space. She was a true angel in the form of a black Lab, and she continues to be an angel in all our lives.

When she was buried, we made a little memorial area for her. Yesterday, on the anniversary of her death, I refreshed the planted flowers, cut some fresh ones, and lit her Mary candle for the day. When we went outside in the evening to have a little toast to her, Honey came, too. After we sat down on the patio and gazed upon the memorial, we noticed Honey repositioning herself, as though she wanted to be right next to Flicka. Yes, the spot she chose was in the sun, but there were lots of other sunny spots in the yard--she picked that one.

A year ago, we swore we'd never get another dog. No way. Wouldn't even consider it.

Some of my life's greatest blessings fell from the sky, showed up out of no where, with no effort--and often resistance--on my part.

Thank you for all your work on both sides of the veil, Flicka. 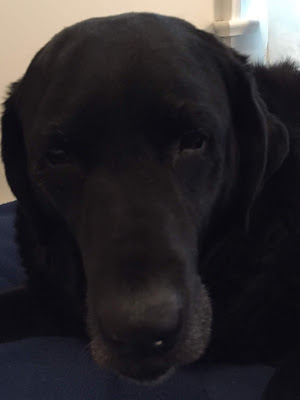 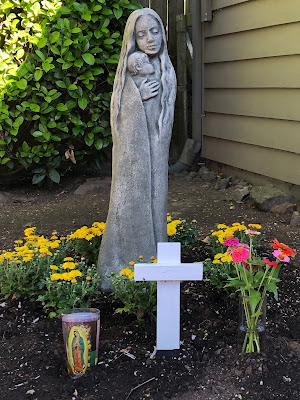 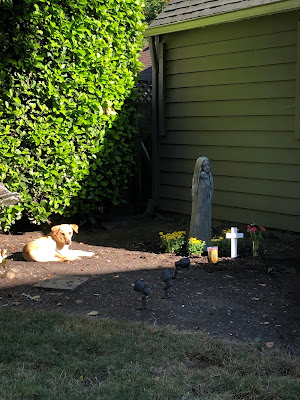 Went to Trader Joe's on Sunday, and there was a man selling Hermiston watermelons on the corner of the parking lot. He had a white van, a couple Costco tables, and a huge box full of watermelons. On the tables were selected watermelons, their ripeness visible from the way he'd turned them. Along the inner edge of the tables was a row of homemade corn muffins.

I parked my car, and walked over to the man. He swallowed whatever he was chewing--presumably a corn muffin--wiped the crumbs from his face, and extended his big, warm hand to me. He was several inches shorter than me, and I noticed a walker pushed up against a nearby tree.

"Nice to meet you, John," I said, noticing his smile full of original, white, straight teeth. His eyes looked 91, but the rest of him belied his age.

"Which one do you recommend?" I asked, pointing to the watermelons.

"They're all good--guaranteed. I been doing this for 76 years, in six states," he said, again flashing me his incredible smile.

For me, the day after Labor Day, will always feel like the first day of a new year--much more so than January first. First as a student, then as a teacher, then a mother of students, there are a lot of first days of school in the rearview mirror.

I miss back-to-school shopping. I miss getting a classroom ready. I miss the organizing and newness, the fresh start with new supplies and a ready attitude. Good thing I have a friend that's an elementary teacher, and she lets me come in and write names on name tags, mail boxes, folders and notebooks.

Portland Public Schools actually started last week, so the school right down the street from me, had all that eager energy a week before I was prepared for it.

Today is the day I am ready to start again.

This 2019-2020 school year, I am vowing to waste less time--especially with my phone. If I have five minutes here, ten minutes there, I will pick up a book. Or, I will take one of the 78 Tarot cards I've always wanted to understand, and study it, learn its intricacies, with the hope that end of this school year, I, too, will have been a student. I will keep a journal, and jot down my thoughts, ideas, gratitudes and concerns. I will not settle into a laziness, but continue to strive, grow, challenge and expand.

Big Questions of the Day

Had a dream last night that I was in the house I'd grown up in, and intruders entered. Several of them. Six? Eight? More? Men and women, non-threatening, but in they came and they wouldn't leave, despite me asking them to, repeatedly.

I reached for my phone and called 911. The operator said, "I can't find a pen right now, can you call back?"

But I can't shake it.

We had recently been in Eugene visiting my brother and his family, and they live in my childhood home. They still have the four yellow chairs we bought in the 70s, to go with the groovy coordinating, yet not matching, floral and striped wallpaper. Two walls each as I recall, but I can't be sure. Two orange chairs and four yellow.

My nephew didn't know the history of the yellow chairs, so when I got home I searched through thousands of unorganized photos on my laptop, to find one with a yellow chair. Found one, but it only had the tiniest tip showing. Just enough to give you proof, but not enough to really satisfy.

Where did the two orange chairs go?

Why the intruders? What part of me is intruding?

What part of me doesn't match?

What part of me got left behind?


Yesterday was Ash Wednesday - the beginning of Lent. Forty days with a focus on fasting, praying, and giving. I had been thinking about what I wanted to fast from, for many months, and had come up with being negative/critical/complaining. I was hoping I could make it to lunch without breaking my fast.

I am teaching a small group of kids at church, preparing to be baptized at Easter. With ash crosses marked upon each of our foreheads, we discussed what we'd learned at Mass earlier that day: the meaning of Lent, the symbolism of the ashes, and what we were going to do during our own individual Lenten journeys.

One of the older students, a sponsor to a younger student, after a group discussion about giving up Xbox, iPods, candy, sweets, etc., said she was a going to do "more of a figurative fast." It's not my place to publish her personal decision on what to fast from, but suffice it to say, I was blown away by her maturity, wisdom, perspective, and approach. It gave me both hope for humanity, and raised my own bar. She shared that she'd made this same journey a few years ago, but had decided it was time to bring it back around again, now that she's older and sees it differently.

I am listening to Eckhart Tolle and Oprah's Super Soul Conversation podcasts on A New Earth: Awakening to you Life's Purpose. I've listened to each one at least twice already, and many years ago when they did their webcasts, I listened and re-listened over and over again throughout the years. It seems to take repetition to break through to any kind of deeper understanding. Even then, the tendency to "forget" is strong.

And so with the help of Eckhart to become more conscious, more in alignment with my inner purpose, to be in the Now, I step forward into Lent. More mindful of that from which I am fasting.  More prayerful. More giving.

Yesterday was Wil's annual needs assessment. Oregon has moved away from the ANA, and is now conducting the Oregon Needs Assessment, which, thankfully, only needs to be done every five years. "Unless that changes... you know how things are always changing," Wil's Personal Agent said.

Yes. I know how things are always changing.

What doesn't change is the PTSD the needs assessment activates. Because of the new tool, and new rules that come with it, Wil's PA came as support and for advocacy, but a second person came to administer the assessment. Through emails with the PA, I was well-prepared for what would happen, how long it would take, and what was expected from Wil. For the 100-minute appointment, Wil was asked to partake for 30. Much pre-paving and elaborate scheduling to assure he was well-fed, under-scheduled, etc. took place.

The PA and the assessor, in 30 minutes, got that. And more. They really saw and heard and gathered and gleaned. The three of us were able to finish the assessment without Wil, and there was a sense of teamwork, Team Wil. AND, Team Care.

If anything, the convincing was on their part. They could tell that there are a million-and-one ways I personally support Wil in a day, many I am not even aware of, because they've always been there.

This is my first experience in nearly 23 years, of being accurately, and fully seen and understood by an outsider.

It is empowering, humbling, liberating, validating, and a little unsettling. It's Brené Brown-level vulnerability.