Life is But a Dream


Did you guys watch your "Super Soul Sunday" last night with Thomas Moore? That show, alone, makes it worth having cable. Moore, a former monk and now psychotherapist, talked about how to make A Religion of One's Own. Loved it and everything about it.

He also spoke about the importance of our dream life, and tapping into it for greater understanding and healing. I just came across two dream journals as I continue to purge, and although I eventually tossed them, it was interesting to see what I've dreamed and wrestled with in the past, as opposed to now.

A few nights ago I dreamed I was running a marathon (I am a huge walker, but not a runner). I was running alone, and apparently, the only runner in the marathon. The marathon was unmarked and held none of the hoopla marathons typically do. I couldn't even tell where I was on the course - no end in sight.

I kept running and running and wondering, am I almost done, yet? I looked down at my shoe to see if there were a chip that was keeping track for me, but there was a padlock, instead.

The dream ended when I finally decided enough was enough, I must be close enough, or more than likely, past the unrecognized finish line.

The marathon part of me.

The running (not walking) part of me.

The unmarked part of me.

The no-hoopla part of me.

The no-end-in-sight part of me.

The padlocked part of me.

The unrecognized part of me.

The self-determined finish line part of me.

Wil and I are spending a lot of time together, as in, 20-hours-a-day. Yes, certainly, some of that is spent sleeping, but if you don't think he's on my mind when I'm sleeping, you've got another think coming.

Wil has a wonderful Personal Support Worker (PSW) that spends four-hours-a-day with him, and I am trying to re-shift the way I spend my days, my time, my energy, to be home and stay home during those four hours, and drink in the silence. Maybe it's a matter of not enough medicine, maybe it's a matter of boredom, maybe it's a matter of happiness over-flowing, but when he's home and awake (which is after I've gone to bed and before I've gotten up, lately), there is constant noise coming from wherever he is.

I've taken to recording 10-second snippets on my phone and sending them to my friends to torture them, and to elicit sympathy. You take those 10-seconds, multiply them by the hours and hours a day over 19-years, and you'll have greater understanding for why I have trouble stringing words together these days, either written or spoken. "I'm shot," my husband said the other day, after spending many weekend hours with Wil, "he 'shots' me."

And while we are both "shot" and our basic skills compromised, Wil is thriving. He's happy to be out of the school structure. His square peg is relieved to be out of the round hole. He is volunteering at two different Catholic grade schools, and loving his time with younger kids and staff. He is ready to officially be the teacher he's always unofficially been.

Andrew goes with Wil to his volunteer jobs, and then before or after their shift, they usually go get something to eat, which Wil has now reduced to doing once-a-day. Don't ask him to eat more than that. It's unhealthy, expensive, inconvenient and a pain-in-the-who-ha, but it's a phase that ain't going anywhere soon.

Yesterday, Andrew returned Wil from his job but had to be somewhere else right away, so I took Wil to lunch. We had heard about a new pizza-by-the-slice place, and he was willing to venture beyond the tired places we usually frequent, so away we went. We found a parking spot on the busy street, but it had his side of the car opening wide into oncoming traffic. I wanted him to either crawl over and get out my door, or wait for me to open his door until I could get around and monitor the situation carefully.

He wouldn't hear of it, and opened up the door, with no regard, to the speed and distance of approaching vehicles. I shouted a warning, "Wil! Wait! Watch for cars!"

He replied, equally adamant, "You've got to realize, that when I'm in trouble, you're OK."


We all have a friend or two, or even more, if we're very, very lucky, that always guides us to just what we need, when we need it. My friend, Val, is like that for me. She came over for tea this summer, and with her she brought a set of Mother Mary Oracle cards, and taught me how to use them. It should be noted that I have yet to draw such cards as the ones above, and have even dug through the stack to make sure they were included in my stack. No, I continue to draw Our Lady of Truth, Our Lady of the Inner Gate, Our Lady with the Moon at Her Feet. Go ahead and say it with me, "No accidents."

Over and over I receive messages such as, "You must provide the trust in me that gives you courage to take the journey." "Your world is changing, triggered by the transformations already happening within you as you grow spiritually." "I will help you outgrow that which no longer serves, so that what you struggle to attain now, through effort, in time will come naturally to you."

There is also a theme running of not getting what I want, because something different is intended, which begs the question, why even ask?

Each morning I try to quiet the monkey mind, sit in my prayer space with lovely music and lots of candles, and pull a card after shuffling with some degree of inner guidance. One option outlined in the guidebook is to draw three cards, and line them up left to right. The first one you draw represents the past, the second the present, and the third, the future. You are to have the intention of integrating the past, understanding the present, and opening up to your best possible future. This is what I drew today: 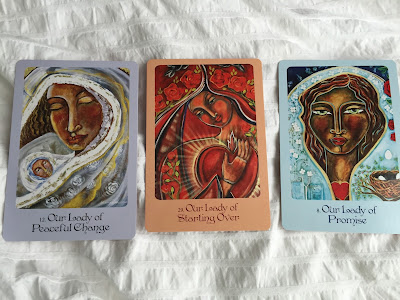 By integrating the past, I know that the changes I have encountered, were actually blessings of answered prayers. By understanding the present, I know that I have to surrender all doubt and fear, and trust in Mary's loving grace. By opening up to the best possible future, Mary promises to replace fatigue and struggle with boundless energy of compassion and passionate purpose.