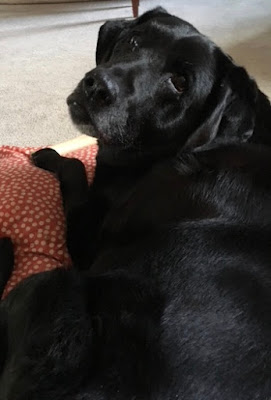 Three weeks later, and it's not much easier to talk about.

My dad used to say, "I don't get a dog because I want to be free to go, but the truth is, nobody 'goes' less than I do."

That was not the truth. The truth was, he could not bear to put himself through the inevitable loss he would one day face. The loss he'd experienced before, and knew he could not do so again.

That never made sense to me. He needed a dog for companionship, for purpose, structure to his days, for the unconditional love a dog would offer, and he craved.

It makes sense to me, now.

I have never been with another soul as the veil got thin, and they passed right on through.

I have never been the one to choose the date and time of another's passing.

I will never do it again.

The time was holy, unifying, and beautiful. The days leading up to it, I sat with her for hours, praying, petting, and trying to make peace. I shuffled my Mother Mary Oracle cards, pulling one I had not ever pulled before: Our Lady Who Sends the Angels. I prayed that Claire, who had brought Flicka into our lives, and had passed a few years ago, would be there to greet her. I prayed that those whose names I knew, and those whose names I didn't, would escort her lovingly to the other side.

My husband and I had candles, music, tears and time with her. Flicka lifted her head off her bed and alertly looked towards the door of the living room. Her cataracts had prevented her from seeing much of anything for years, but she "saw" something. She put her head back down, rested comfortably while we petted her, then again, raised her head and "looked."

"She can see them waiting for her," I said to my husband.

"She certainly can," he said.

Soon, the waiting was over. She was one with those ascended souls with whom she belongs.

I do not cry easily. I tear up, but to actually cry? It had been years since I'd lost myself to tears. I cried more in the days leading up to, and following Flicka's death, than I have in the last 40 years, combined. When I tried to sort out why, I came to understand it was because her death was 100% sad. All the other deaths I'd experienced had other complex emotions, chaos, crisis. This had none of those things. There was no drama, nothing complicated. Just pure sadness.

"Remember, you're putting her 'up,'" my friend, Ilonka Michelle O'Neil, told me, as I shared with her the struggle to make the decision of when, not if.

There is no doubt in my mind that she is "up." If one can continue to ascend from the other side, and I believe that to be so, Flicka went straight to the highest ascension possible. Our Lady sent the angels, and now, Flicka is one of them.
at September 27, 2018

She was such a good girl.

Oh Carrie, I'm so sorry for your family. She is beautiful and so lucky to have a human who cared and made certain she did not suffer. Love to you ❤️

Oh, Carrie. I am so sorry. We lost our Valentine this past summer, and I, too, found it 100% sad -- far more sad and difficult than I had ever imagined. I am still grieving, as will you. Thank you for writing so perfectly about this, for your constancy of love -- just for everything.